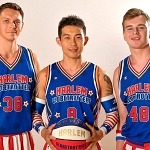 The world famous Harlem Globetrotters today continued to extend the global nature of their roster, announcing the signing of their first-ever Ukrainian player who immediately joins the team's 2020 "Pushing the Limits" World Tour. Smoove Kryvenko, a high-flying 6-2 guard from Komsomol's'ke, Ukraine, joins the team's two other international rookies, Lucky … END_OF_DOCUMENT_TOKEN_TO_BE_REPLACED 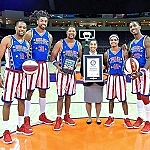 The Harlem Globetrotters today added six new GUINNESS WORLD RECORDS titles to their long record of accomplishments--including a record title for the most sovereign countries played in by a basketball team—in honor of GUINNESS WORLD RECORDS Day (GWR Day) highlighting this year's theme, Spirit of Adventure. To see the new records, watch the video here:  The six new record … END_OF_DOCUMENT_TOKEN_TO_BE_REPLACED