Trey Parker and Matt Stone are extending the Emmy and Peabody Award-winning South Park by three seasons and 30 episodes in a new deal withComedy Central, taking the longest-running primetime scripted series in cable though an unprecedented 26th season and at least 327 episodes. The 23rd season, during which the iconic series will surpassits milestone 300th episode, will … END_OF_DOCUMENT_TOKEN_TO_BE_REPLACED 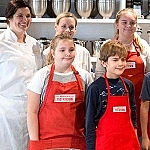 From the country's most trusted test kitchen, comes America's Test Kitchen Kids' Young Chefs' Club! At America's Test Kitchen, a staff of professional chefs and thousands of volunteer home cooks has put every single Young Chefs' Club recipe through the paces like nobody else could – and, in this case, all of those home cook-testers are kids. The new Club will deliver … END_OF_DOCUMENT_TOKEN_TO_BE_REPLACED