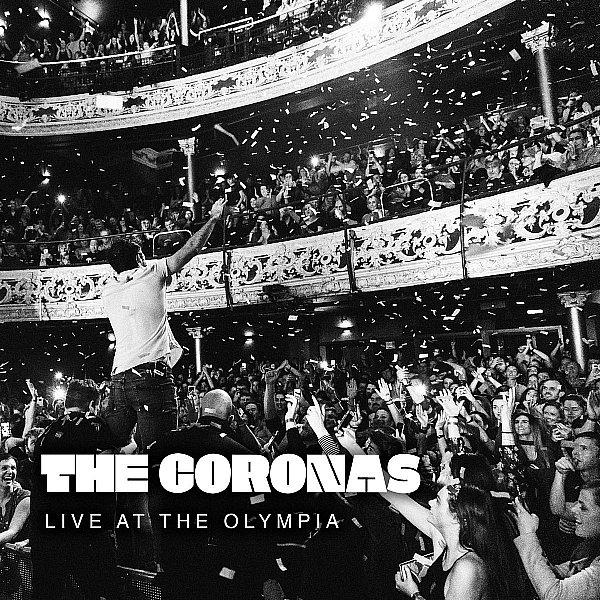 Ireland’s hard-working band, The Coronas, who are closing out a series of sold out holiday concerts all over Ireland, are finishing off an action-packed year with the release of an album of stellar live concert performances entitled LIVE AT THE OLYMPIA, available today (27).   A live version of “Heroes or Ghosts,” the title track of the band’s very first album released in 2007, was the first track released from the new collection.  It illustrates the devotion of The Coronas’ fans who are known to sing along at shows, and in this case, take over the lead vocals when Coronas’ front man Danny O’Reilly steps away from the mike. They even join with him on the second verse sung in the Irish language.

You can listen to “Heroes or Ghosts” from LIVE AT THE OLYMPIA here:

The Coronas, who have been described as “Ireland’s best-kept secret,” wrap up some nine sold out holiday concerts—that included a three night run back at the Olympia Theatre this year as well—with shows tomorrow night (28) at The Royal Theatre, Castlebar, and Saturday night at the Gleneagle INEC Arena in Killarney, Their only U.S. appearances this year were three nights in November at New York’s Mercury Lounge, all sold out as well.

That will change in 2020 when The Coronas, who have been at work recording what will ultimately become their sixth album, release their new music early in the new year.  Tour plans are already under way to bring The Coronas back to Australia, the UK and the United States in the new year.

To kickstart the recording process for the new album, The Coronas came to Los Angeles to record four new songs with producer Rob Kirwan, who rode the crest of worldwide success with his recent producing project, Hozier’s Wasteland Baby!  The band continued work on the new album in London with George Murphy who engineered their last two albums.

Last May, they rolled out the first music from the new album–the single “Find the Water”—which immediately catapulted to #1 on Ireland’s iTunes chart upon release. A paean to the need for ongoing self-improvement, both personal and on the band’s own trajectory, it provided a glimpse into the direction the next album will take. “It has a different vibe and pace to our older work,” explained O’Reilly.  A live version of “Find the Water,” recorded in the summer the Irish Independent Park in Cork, is also included in the new live collection.

LIVE AT THE OLYMPIA captures the exuberance and excitement of The Coronas live in concert as well as the fervor of their devoted audiences. “Over the years we’ve had so many special nights in The Olympia,“ explains Danny O’Reilly.  “There was the night the power went out, the six-night sold-out run, and the Heroes or Ghosts anniversary show: all amazing memories that will stay with us forever.  So, when we decided to finally record a live album — something that people have been requesting from us for a long time – it seemed only fitting to record a show in one of our favourite venues in the world. It was recorded over four nights last Christmas.”

Danny O’Reilly joined Glen Hansard, Imelda May, Hudson Taylor, among others, for the annual Christmas Eve busk to raise money to combat homelessness in Ireland. Several thousand people braved the cold outside the Gaiety Theatre in South King Street in the heart of the Dublin’s shopping district to hear the music and support the cause. O’Reilly performed one song with his sister Róisín O of the band Thanks Brother.

LIVE AT THE OLYMPIA is available now via digital outlets worldwide through the band’s SoFarSoGood Records imprint distributed by Blix Street Records.

NOTE: All tracks recorded live at the Olympia Theatre Dublin except “Find the Water” recorded at Irish Independent Park in Cork.