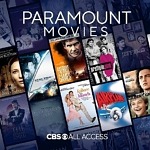 CBS All Access, CBS’ digital subscription video on-demand and live streaming service, today announced the addition of more than 100 films from Paramount Pictures’ library to the service. Titles include Oscar-winning films like “The Godfather,” “Terms of Endearment” and “An Inconvenient Truth,” as well as other beloved classics like “Star Trek: First Contact,” “Patriot Games” … END_OF_DOCUMENT_TOKEN_TO_BE_REPLACED