Society of Composers, Authors and Music Publishers of Canada 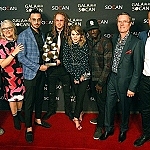 Many of the best songwriters, screen composers, music publishers and major players of the music ecosystem gathered at La Tohu in Montréal to celebrate the 30th anniversary edition of the SOCAN Awards Gala, where more than 50 trophies were presented to honour Québec's creative talent. Masterfully hosted by Pierre-Yves Lord, the gala opened with the … END_OF_DOCUMENT_TOKEN_TO_BE_REPLACED