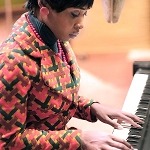 oday, National Geographic and Fox 21 Television Studios released a first look photo of triple threat Tony-, Emmy- and Grammy Award-winning Cynthia Erivo (“Harriet,” “The Color Purple”) as Aretha Franklin during the GENIUS: ARETHA start of production. “Over the last few months, I’ve been preparing myself to embody the Queen of Soul, from relistening to her … END_OF_DOCUMENT_TOKEN_TO_BE_REPLACED