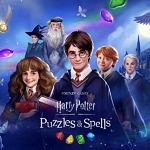 Harry Potter: Puzzles & Spells, the recently announced game coming to mobile devices worldwide, has released its first official teaser trailer. From platform nine and three-quarters and Diagon Alley, to the Hogwarts Express and the Grand Staircase, this first video takes players on an advance tour of some of the beloved settings they will visit as they progress through … END_OF_DOCUMENT_TOKEN_TO_BE_REPLACED